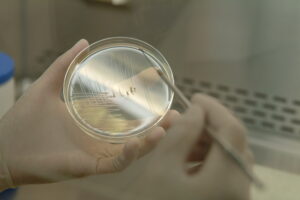 Biocontrol Technology Research team focuses on research and development of biocontrol agents (fungal and bacterial origin) for control of agricultural pests and insect disease vectors. We aim to develop biological products with high efficiency and safety. Our researches cover from screening of bacteria & fungi with potential for insect and weed control to development of production process and product formulation technologies. The practice use of these biocontrol agents are studies consecutively at a laboratory, greenhouse, and field trial level. Finally, the technologies would be transferred to farmers and entrepreneurs, and our team is also collaborating with related government and private sectors to promote the use of biocontrol agents.

Screening of plant pathogenic fungi for controlling of weed (Mycoherbicide). The fungi must show specific pathogenicity against either broad or narrow leaf weeds so that they could be applied without affecting other plants. The fungus itself or its metabolites could be developed as an effective bioherbicide. Safety assessment with more than 20 economic crops as well as toxicology testing in animal are under investigated.

2.1 The fungus Beauveria bassiana for controlling of aphids, brown plant hopper, and cassava pink mealybug. At present, we are developing large scale production process and formulation. In addition, we are investigating virulence mechanism focusing on proteins or secondary metabolites produced from B. bassiana that play important role in the insect pathogenic process.

2.2 The fungus Metarhizium anisophilae for controlling of red mites, blossom midges and beetles. The fungus shows high activity against those insects when testing in the laboratory. Our ongoing work is to demonstrate the efficacy in the field.

2.3 The fungus Purpureocillium licacium for controlling of chilli thrips which is currently evaluated in
a field test. Formulation development for extending the shelf-life is also in progress.

2.4 The fungus Isaria fumosoroseaus for controlling of tobacco whiteflies which is currently evaluated in a small field test.

2.5 Screening of entomopathogenic fungi for controlling of white mite.

3.1 Our team is now emphasizing on Vip3A protein from B. thuringiensis that can effectively control larvae of lepidopterans such as beet armyworm and common cutworm. Currently, low-cost media and production process at pre-pilot scale are under development. Product formulation for longer shelf-life is also studied. In addition, basic sciences regarding different aspects of Vip3A are investigated, including protein structure-function relationship, role of particular amino acids in virulence mechanism, and factors involved in protein stability and production.

3.3 The bacterium Bacillus thuringiensis israelensis (Bti) for controlling of mosquito larvae, housefly larvae, and fruit fly larvae. The efficiency against the latter two worms is currently investigated under laboratory conditions.